Without any change in Pay level on 31st October 2019, the post of Senior Accounts Officer in Central Civil Accounts Service is classified as Group ‘A’ post w.e.f. 9.4.2009

According to the OM issued by the Controller General of Accounts on 31st October 2019, the post of Senior Accounts Officer in Central Civil Accounts Service is classified as Group ‘A’ post w.e.f. 9.4.2009 without any change in Pay Level.

The order also said all settled cases (such as promotions to the post of Senior Accounts Officer, induction into ICAS, disciplinary cases, etc.) will not be re-opened. The attendant benefits such as consultation with UPSC for promotion, change in disciplinary authority, contribution to CGEGIS, etc. will be effective from the date of issue of the order for classifying the post of Senior Accounts Officer as Group ‘A’.

What is Classification of Posts?

Divide all the employees working under central government into categories or groups based on post. The classification is more important aspect that entitlement of various pay, perks, facilities and concessions. 6th Pay Commission recommended the classification of posts as 4 categories. But, the Central Government abolished ‘Group D’ posts.

Classification of Central Govt Employees as Group A, B and C according to their Pay Level in the Pay Matrix Table

Persons in Position in Terms of Categories: Groups A, B and C

All Central Government civil posts of the Union are categorised under the Central Civil Services (Classification, Control and Appeal) Rules, 1965. There are currently three categories of Central Government personnel–Group `A’, Group `B’ and Group `C’. This categorisation is made by the government based on the pay band and grade pay or the pay scales as applicable.

The data provided by the ministries/departments is consolidated in terms of the three categories of personnel as per Table 4. 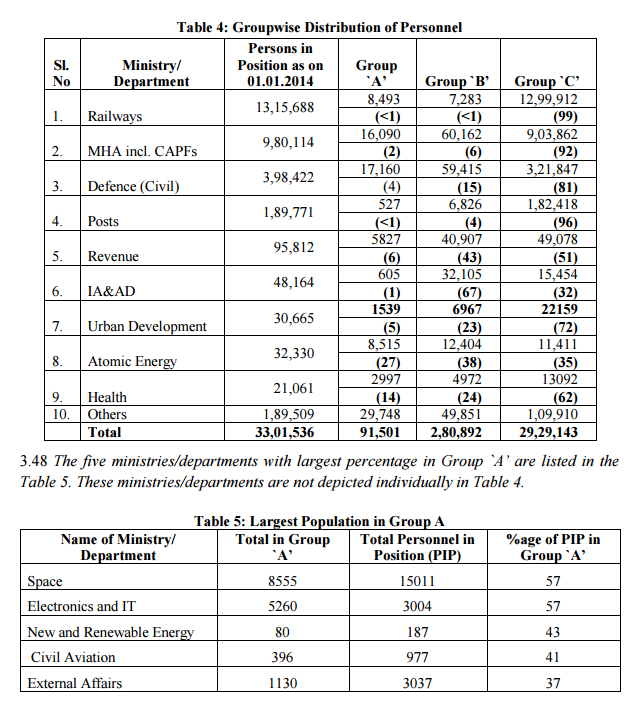 Tables 4 and 5 bring out the following:

ii. While 89 percent of civilian Central Government personnel are in Group `C’, the Railways, Department of Posts and MHA have a significantly higher proportion in Group `C’ at 99 percent, 96 percent and 92 percent respectively.

iii. Scientific and technical focused ministries/departments have a high percentage of Group `A’ Officers.

The Ministry-wise particulars of composition of personnel in terms of Group `A’, `B’ and `C’ are detailed in Annex 4.

There is no special recommendation on classification of posts in Central Government services.

Classification of Posts as per 5th and 6th CPC

The minimum Grade pay of Rs.1300 was recommended by the committee, but Central Government had decided to upgrade all the employees working in Group ‘D’ to Group ‘C’.

Please write your comments and suggestions on this subject to us…